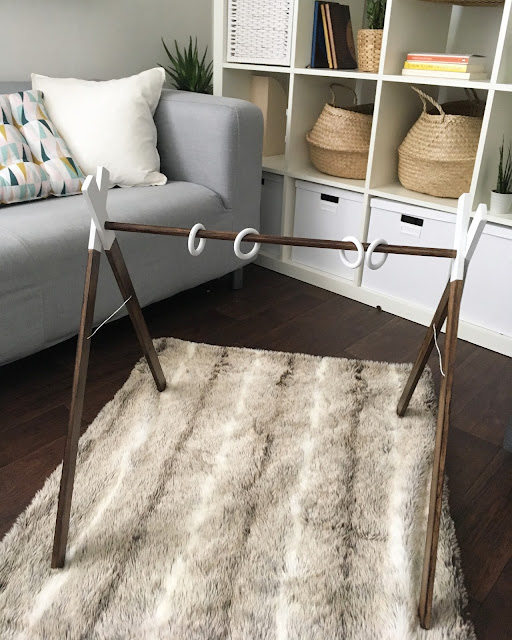 **I wrote this post on my Blogger account when I was pregnant with Gabriel; I was going to edit it but I like that it is a little part of my pregnancy with him so have left it as it was. This was such an easy thing to make-if I can make it (someone who once flooded the kitchen whilst trying to ‘fix’ the washing machine or put water based grout on a water damaged worktop hoping it might solve the problem by having tiles on it, don’t ask-I thought it was a good idea at the time) then anyone can do it. I still have Gabriel’s play gym , I’m not sure what I’ll use it for but it’s something I will keep and find a home for when we move into our new house in the near future. I thought I’d share it here so if any of you lovely lot wanted to make one, it’s here for you to read and it’s also part of my little one’s story so why not have it here too.**

A few weeks ago I wrote a post about the things which I needed to get to be prepared for the arrival of my little one. I really do not want to go crazy and buy lots of things which I know will be used for a fleeting moment, if at all, and then put in a cupboard.

One of the things I do want for him is a play gym, I had a look online and couldn’t find anything which I really liked/went with the interior of my living room. Then I came across wooden framed play gyms on Etsy. So of course, I made my way over to Pinterest and after a while of scrolling, I thought, ‘I could make one of those.’ I’m not sure where my inner carpenter came from, but it soon had me in B&Q buying lengths of timber, dowel and a thing for the drill which spins around and makes a big hole. (I’ve forgotten what it is call-I will Google it and be sure to put it’s technical name in the list of things you’ll need.)

I already had a saw (from a previous moment of inspiration, where I made a radiator cover from an old pallet-yep, thank you Pinterest). 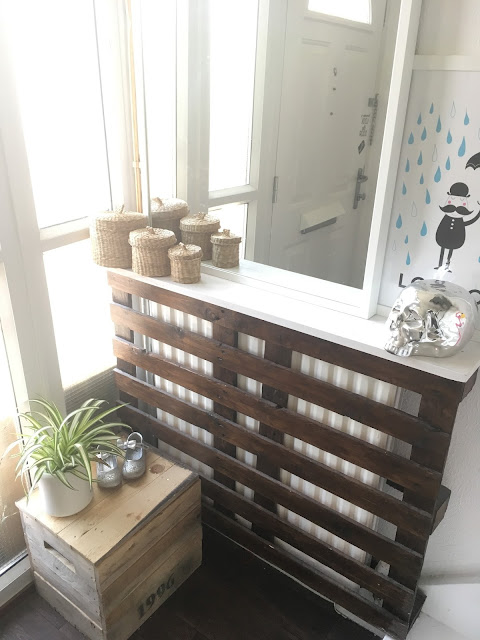 So after my shopping trip, I was ready to get making.

Here is a list of materials you will need, along with tools to get the job done:

Wood stain and paint (if you want to paint it, rather than leaving it eu naturale)

Sander (or sandpaper, if you aren’t lazy like moi)

Before I started I knew that I didn’t want to leave the wood pine coloured, but I wasn’t sure what colour I did want to paint or stain it. So, I tested out a few different options on some spare timber before I started. 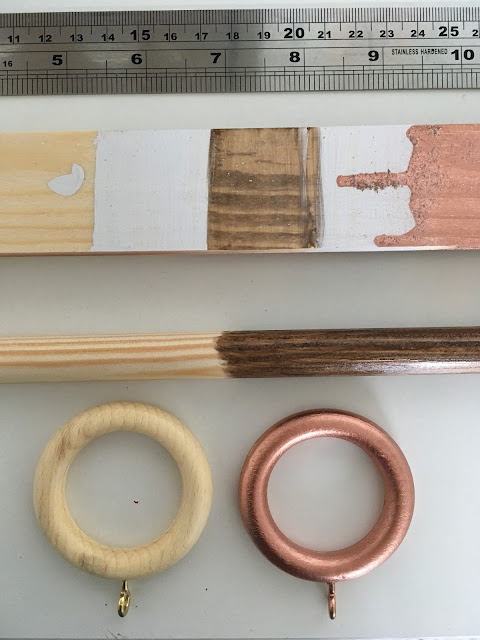 With decision made, it was time to get making.

First I measured four 70cm lengths from the timber and cut them to length, with the saw. 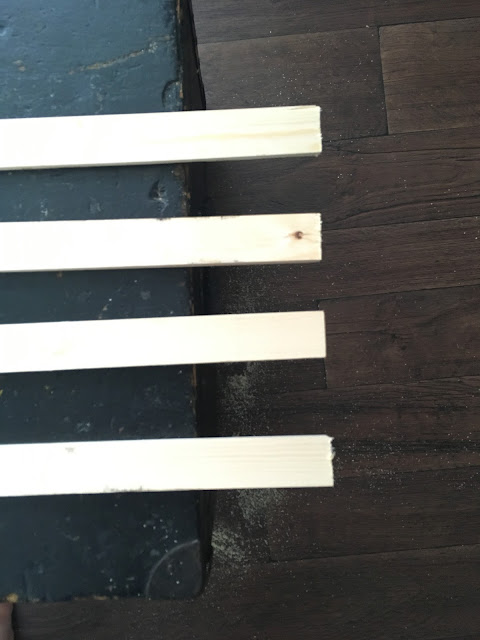 I measured and marked 10cm from the top of all the lengths (the legs of the play gym) and ensured it was centred before using the flat drill bit to make a hole in each leg. 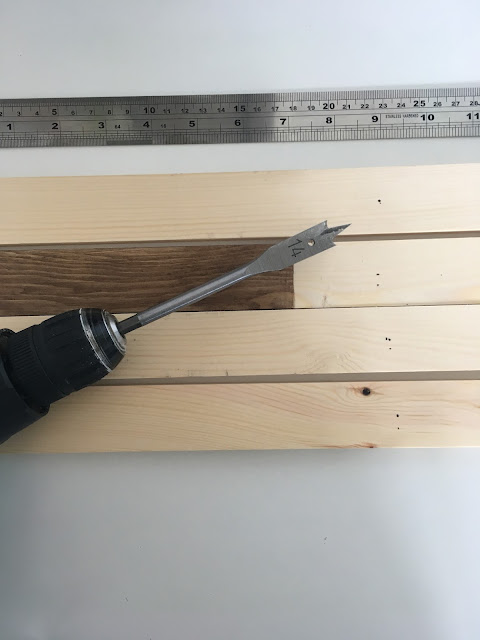 This was the bit I was most worried about messing up as I’d never used one before-but it was a piece of cake. 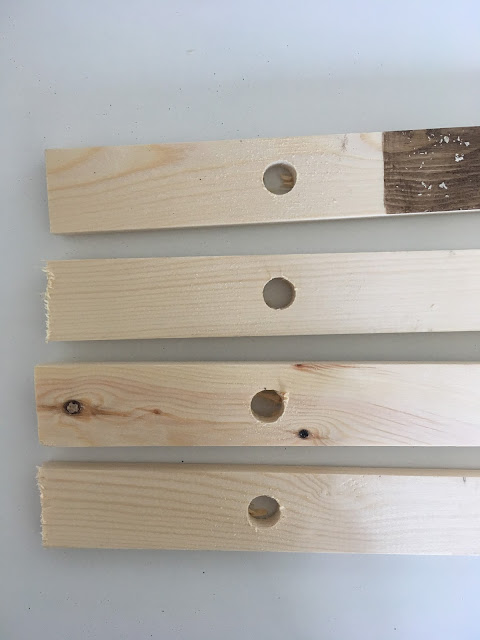 I then measured 20cm from the hole I had just made and again made a central mark. Using a small drill bit (big enough to thread your string through) I made a hole in each leg. 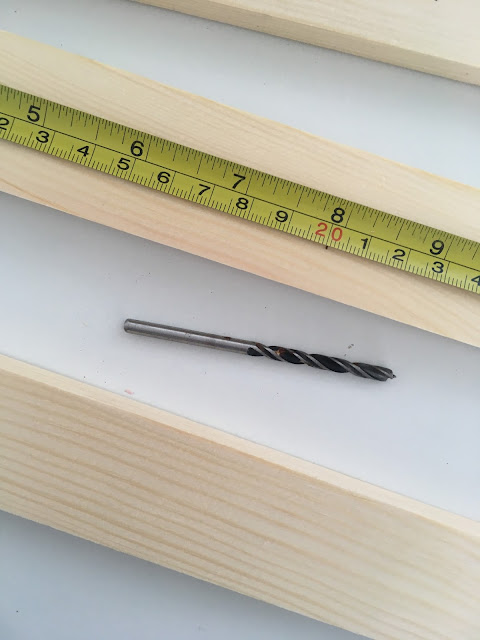 With all the holes made, I sanded everything to ensure that all the edges were smooth and used the sander at an angle on the top and bottom edges to make them rounder, rather than a square edge. 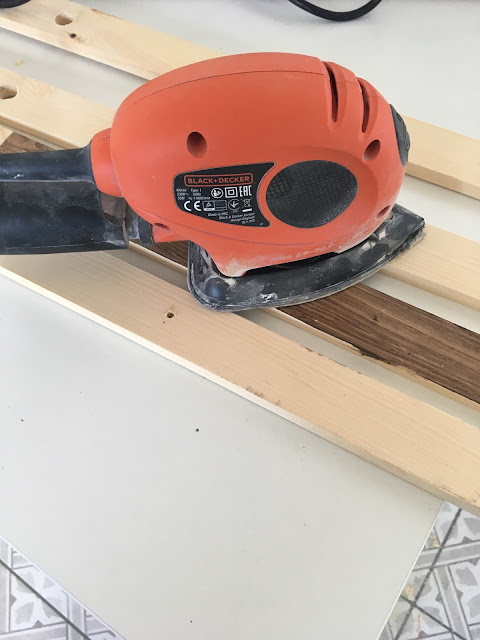 The last thing to do before putting it all together is to paint it. If you don’t want to paint or stain yours, then just scroll down for the last little bit.

I decided to stain most of the wood with a walnut wood stain and then painted just the tops of the legs with Farrow and Ball Blackened, which I had left from painting my living room. I also decided on painting the curtain rings in the F&B paint, rather than spraying them copper, as I originally thought I would.

Once everything was dried (the hardest part as I am so impatient when it comes to little projects like this!) it was time to put it all together.

I used the hammer to gently-not so gently-persuade the dowel to fit into the hole of one of the legs, and then through another. Because the dowel was slightly wider (by 1mm, but still a stubborn millimetre, so it needed a bit of a bash to get it through) it meant that it was nice and snug and I didn’t need to secure it on the other side, once it was through the two legs. 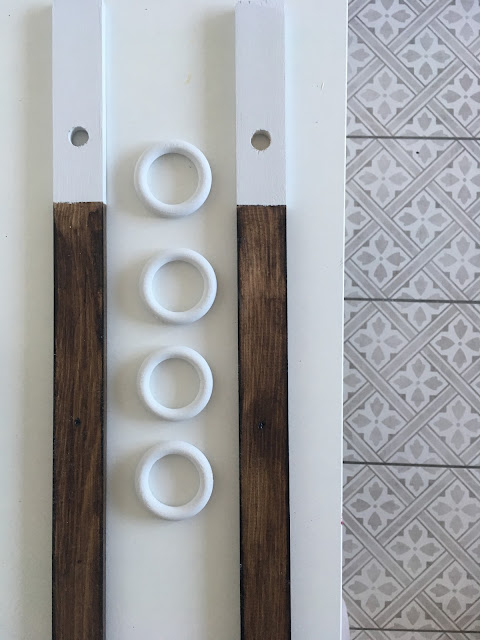 Then, don’t do what I did and eagerly get on with doing the same on the other side without putting the curtain rings on the dowel! After taking one end apart and I had taken the legs back off and put the rings on, I once again put the dowel through the two remaining legs.

Lastly, I threaded a bit of string through the smaller holes on both sides; for now I have just tied knots to secure it, I may buy some wooden beads to make it look slightly nicer. (You may need to use the drill again to open up the holes a little if you have painted the legs.) 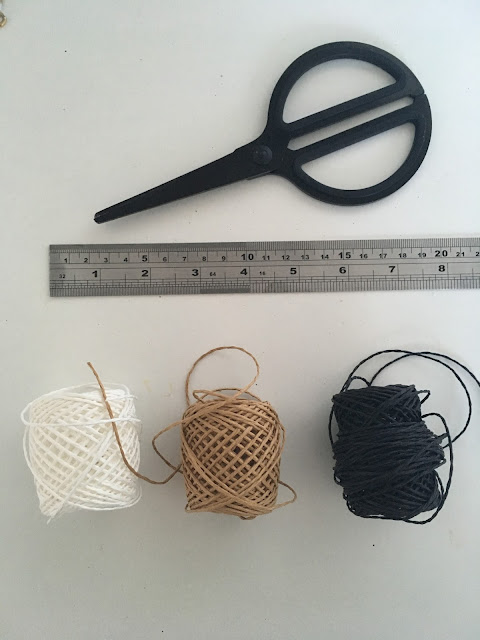 And there you have it, a wooden play gym… 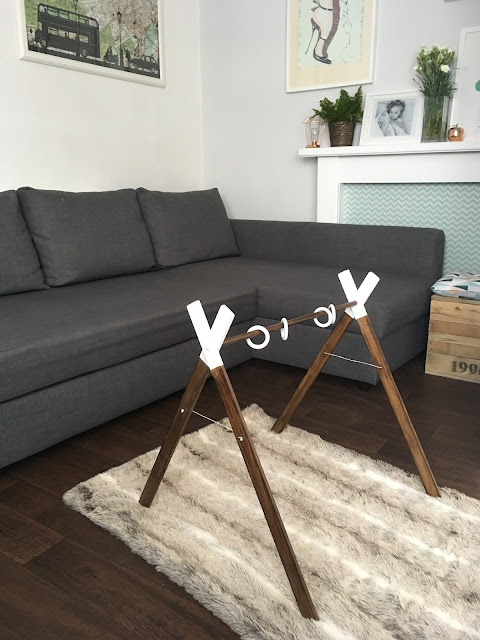 Except it isn’t very entertaining at the moment, I still need to make or buy some toys to hang from it but that won’t involve any heavy machinery so I’ll can do that in the coming weeks before my little Christmas Pudding arrives.